I grew up in a generation that seemed to be surrounded by music…classical music. It was in concert halls, churches, movies…and cartoons.

I didn’t know what the music was at the time, but I recognized it when I heard it in its musical context in concerts or on our FM radio station. And I think that surrounding of us with these pieces gave us an appreciation for music without it being forced on us.

Then things began to change.

I don’t remember what the name of the cartoon was (perhaps a Batman cartoon?), but I remember that there was no music…or at least, none that  I was aware of. Instead, there were word clouds: “Bang!” “Pow!”

It didn’t take long before that became the norm, and music was shoved aside. Not just in cartoons, but also in school as well.

And we’ve become poorer for it.

Music has become an “extra” far too often in schools…something that is first on the chopping block when budgets need to be cut.

And, at least in my own denomination, music–at least classical music–is often seen as something that might be nice but that doesn’t relate well with the “average” person (whoever that might be!). To sponsor a fine arts program? well, if there’s money in the budget, we might be able to do that…but what’s the purpose? Where’s the value?

There have been lots of studies that show that music (and the other arts) help children learn. They help us connect to other people…to the world around us…to the creative parts of who we are.

Music is a language…a language that helps us express emotions and feelings that we have no words for. It helps us connect to the Divine. It is a universal language, even if it is expressed in different forms.

And so…why not music? Why not…in our schools, our homes, our churches? 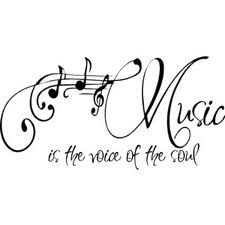