I have been without power most of the day but finally have it back…and I cannot let this day go by without expressing my appreciation to Justice Kennedy for the beautiful words with which he closed his opinion. For far too many years same-sex couples who desired to marry have been denied and accused of somehow wanting to denigrate or disrespect marriage. Justice Kennedy has it right…they have seen something in the idea of marriage that has touched them deeply…and it is out of respect for that relationship that they have desired. I for one am glad that my brother’s marriage will now be legal in all 50 states…and that my friends and my friends’ children will also all have the right to marry the one they love. 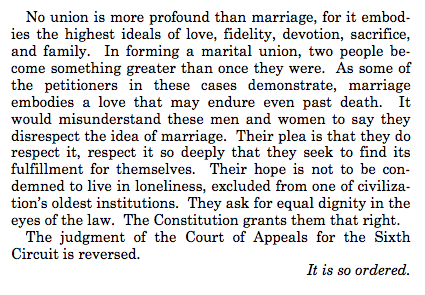 I grew up as a PK (preacher’s kid). My dad was a fulltime minister in our faith tradition…so that meant church, church, church…and more church! Every time the church doors were open!

He did a lot of traveling as well, because from the time I was 8 until well after I was married, he was one of our denominational leaders, responsible for different geographic areas. That was before it was so easy to fly back and forth, so if he wanted to see his family during the summer (and if we wanted to be with him), that meant we traveled together. We basically would leave shortly after school was out and get back into town not too long before school started in the fall.

We spent much of that time traveling to and attending family camps–week-long camping experiences that incorporated classes, worship, recreation… Obviously, by the time the summer ended, my brothers and I were pretty well tired of the stories and crafts–we knew them by heart!

There are several memories of those summers. We often camped (tent!) on the way, because motels were expensive for as much as we traveled. We would help set the tent up and get everything ready for the night. We had a small cookstove that my mother cooked supper on for us. As a child I thought it was a marvelous adventure! When it was bedtime, all three of us kids would be tucked in our sleeping bags on our air mattresses, and Mother would read from one of the books she had brought along for bedtime stories for the summer. Packing up in the morning and getting everything ready for the road was usually not too much of a problem…except when it either had rained or was raining. Then trying to get the tent folded up and into the cartop carrier became much more of a challenge!

Looking back as an adult, I marvel at the good humor and patience my mother displayed during those summers. I think I would have dreaded them…figuring out clothing needs, cooking needs, bedding…trying to keep 3 kids from getting bored…being a good ministerial wife…

I have many memories of those camps…but two of them particularly stand out…for very different reasons.

One of them was when I was a young teenager, beginning to notice boys. At this particular family camp, they offered a lifeguard course before the rest of recreation. I decided to take it, partially because it meant extra swimming time. (I never did do very well in the actual lifeguard requirements.) In the class there was was a boy who had a crush on me…and it was very definitely a one-sided crush! I couldn’t stand him! He was obnoxious…and I’m not sure how often (if ever) he brushed his teeth…there was food between all of them. He kept trying to be my partner when we needed one, and I would intentionally avoid catching his eye and try to partner with someone else. That was one camp I was really glad to see end!

The other memory goes back a number of years before that. I think I must have been about 9 or 10. At all of these camps, the mornings started with prayer meetings. I cannot remember where this particular camp was, although I can visualize what the chapel building looked like. The worship had been underway for a while, and I had sort of been paying attention…and being bored, as a child often could be. But I suddenly became aware that something significant was happening. Someone was sharing with our family a message that they felt impelled to share by the Holy Spirit. To this day I have absolutely no memory of what was being said…but I definitely remember being brought to awareness of God’s care and concern for us as a family. It was the first time I remember being aware of the power of the Divine to touch my life (although it was not the last).

I am grateful for all those experiences at those family camps now, although I wasn’t always at the time…and I enjoy being reminded of some of those memories. They have made me who I am and given me a firm foundation to have built on.

There’s been yet another shooting…and again there is hand wringing over what could possibly have caused it. There is discussion about the role guns play in our society…how the shooter should not have been able to get a gun…whether the individuals who had gathered for a Bible study in what should have been a safe place should have been armed–and whether or not that would have stopped the shooting…

But there is little discussion about the role racism played…and whether privilege exists.

I’m a straight white female. How have I experienced privilege? (All of these have been experienced by friends or acquaintances.)

These are just off the top of my head. If I took more time, I know I could come up with more ways in which I am privileged.

I’m also aware that racism lurks just under the surface of this privilege…even when I don’t want it to. If you asked me, I would say that I am not racist…yet there are times when I am uneasy meeting someone of another race when I am by myself. There are cultural differences that I am not necessarily comfortable with when I meet someone who is different from me.

I wish it weren’t so. But it is…and we need to be willing to acknowledge that this unease lies beneath the “civilized” veneer we put on. We need to have a serious discussion about race…and how we are still impacted by the past history of racial relationships.

Until we do so, we will continue to pretend that privilege doesn’t exist…that anyone can do anything they want, if they just have enough willpower…that there is no reason to see things differently (especially our history) from each other…that “cultural icons” should mean the same thing to everyone…and the racial divide will continue to exist.

In many ways, I’ve been blessed. Very blessed. I had all of my grandparents until after I was married…my parents just died in the last few years…and my aunts and uncles were all long-lived. I have experienced few losses of the types many of my friends have.

However, I have experienced the loss of a grandchild…on his 21st birthday. It was the result of an unwise decision he made, a decision whose consequences he did not fully understand…and it killed him. I have never forgotten that.

There have been a number of news stories this week that have brought back a remembrance of that pain…of the loss of a young person whose life is ended before it really has a chance to begin.

Yes, I know it happens sometimes through foolish decisions. Sometimes it happens because of situations out of a person’s control.

And sometimes it happens because of us.

It is tragic whenever it happens.

And it has to stop.

We have to start seeing each other as real people…people with hopes, dreams, fears just like we have. When we see someone being bullied because of perceived differences…or being ostracized because of who they love…we have to start being there to walk their journey with them.

It doesn’t mean that we’re going to agree 100% with everything someone does. That’s not going to happen with anyone.

But if we stand aside when a child reaches the point where death is preferable to the hatred and bullying they face every day, then we are complicit. If we are willing to allow children to be kicked onto the street because of who they love, we are as guilty as those who kick them out. If we are not willing to stand up and say “We need to look again at our religious teachings” if they cause us to fear those who are different and build walls of division, then we are also part of those who build those walls.

It has to stop. One death from bullying is one death too many…and there have been far too many this week…this month…this year.

I have an almost-2-year-old granddaughter who spends a lot of time with us, since we do a lot of the babysitting. When she was a baby, life was reasonably quiet. She was content to just be held, fed, and changed.

But then something triggered in her mind, and she started to actively learn. Actively…as in on-the-go almost all the time! Actively…as in me thinking “I’m tired!” when she goes home. Actively…as in wanting to figure out what those funny squiggles on a page in a book mean. Actively…as in demanding to spend time working with shapes on my tablet.

It’s an incredible experience to watch.

I wish I could be inside her mind, watching how she makes connections…how she figures out how things work…as she puts the puzzle pieces of this world together. I don’t know how she does it.

Everything around her is part of the learning experience. Everything and everyone becomes part of this whole process. And at this point in her life, she doesn’t separate people or things into “acceptable” or “non-acceptable” based on anything except for whether she likes the taste of a specific food or whether someone is too noisy or too rough. It’s all just part of her world.

She has an older sibling who she has adored. She doesn’t see D right now, because D is living with biological mother, trying to get some things sorted out…including gender identity issues. That didn’t matter to Ladybug. D was (and is) someone she adores…who spent a lot of time playing with her. There’s enough difference in their ages that D will be experiencing life as an adult before Ladybug begins school–but I think she will still have positive memories of this older sibling.

As I watch her grow, I am reminded again of a powerful song from the musical South Pacific. Lieutenant Cable has fallen in love with the beautiful daughter of Bloody Mary…but he realizes that he can’t take her back home with him, because she would not be accepted. Why? Because she isn’t “like” the folks back home. He sings this song in agony before he heads out on a mission that he will not survive:

What a tragedy…for people–all of us–to be taught to be afraid of people who are different from us!

All I have to do is to watch Ladybug in her interactions with this world. It’s a fascinating place to her…and me.