We went to the tomb early that morning….

The Sabbath had been so long. I was grateful that Joseph had had the nerve to ask Pilate for Jesus’ body–and grateful that he had offered his own tomb. But I was sorry that we had not been able to say our last goodbyes to Jesus…to anoint his body and prepare it as he deserved.

At least we knew that his body would be safe over the Sabbath. Ironic isn’t it? that the very people who had crucified him would now be the ones protecting his body…

Anyway, as soon as the Sabbath ended, we hurried to the tomb with our spices and ointments. As much as we did not want to see the soldiers, we still hoped they would be there and would be willing to roll the stone away from the tomb for us. If they weren’t…if they were just going to stand and watch–making rude comments–I didn’t know what we would do.

Then we rounded the corner–and there the tomb was. But the stone was rolled away…and the soldiers were gone! What did that mean?

We started running, still clutching our bundles of spices…hoping his body was still there…hoping we could still honor him.

The tomb was empty. The cloth in which his body had been so hurriedly wrapped was laying on the shelf, but that was all we saw. At first, anyway.

Then we became aware of a bright light. I don’t know why we didn’t see it at first. Maybe our eyes just weren’t open because we were so focused on looking for Jesus’ body. But when we finally looked toward the light, we saw a being sitting in it…almost shimmering. Somehow he emanated power…and love…and healing…

Then he spoke. His voice was powerful yet gentle. There was a hint of laughter in it as well. “What are you looking for here? Jesus? He isn’t here. He’s risen, like he said he would.”

We looked at each other in amazement. Then the being continued. “Now, get on your way quickly and tell his disciples, ‘He is risen from the dead. He is going on ahead of you to Galilee. You will see him there.’ That’s the message.”

He is risen? We almost couldn’t believe it–and yet we had to believe it. The one who told us left no doubt in our minds.

And so…I am telling you. He is risen. Jesus is risen! And he goes before you. Watch and see–Jesus is risen indeed! 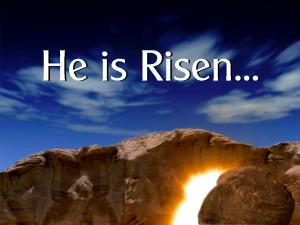